Economies of Scale and Housing

Economies of Scale: The cost advantage that arises due to scale of operation with the cost/unit of output generally decreasing with increasing scale as fixed costs are spread out over more units of output.

You’ve probably heard the term ‘economies of scale.’ For better or worse, it’s the reason Budweiser can get its beer to your mouth for significantly less than a local craft that doesn’t taste like toilet water.

In a nutshell, there is an inverse relationship between the number of units produced and the fixed-cost to produce each unit. As an item is produced in greater and greater numbers, the manufacturer is able to spread the costs of producing each item out over a larger scale. The resulting savings are passed on to consumers. This is a boon for the consumer who gains access to a popular product at a lower price.

We traditionally think about economies of scale in terms of tangible products, from small ones like the phone in your hands to large ones like the car you cruise around in. However, the theory applies to housing as well.

Take a look at apartments in Seattle. You could go out and find yourself a cozy one-bedroom for $1,500/month. You’d have a nice pad in a decent neighborhood. You may even have a little money left after paying rent for coffee every morning.

Alternatively, you could grab a couple of your best friends and lock down a three-bedroom for $2,500/month. In this scenario, you and your roommates are each paying about $830/month. That’s 45% less than that one-bedroom. With savings like that, you’re not only able to afford coffee every morning but also able to feast on sushi without having to choose between electricity or water in the coming month. 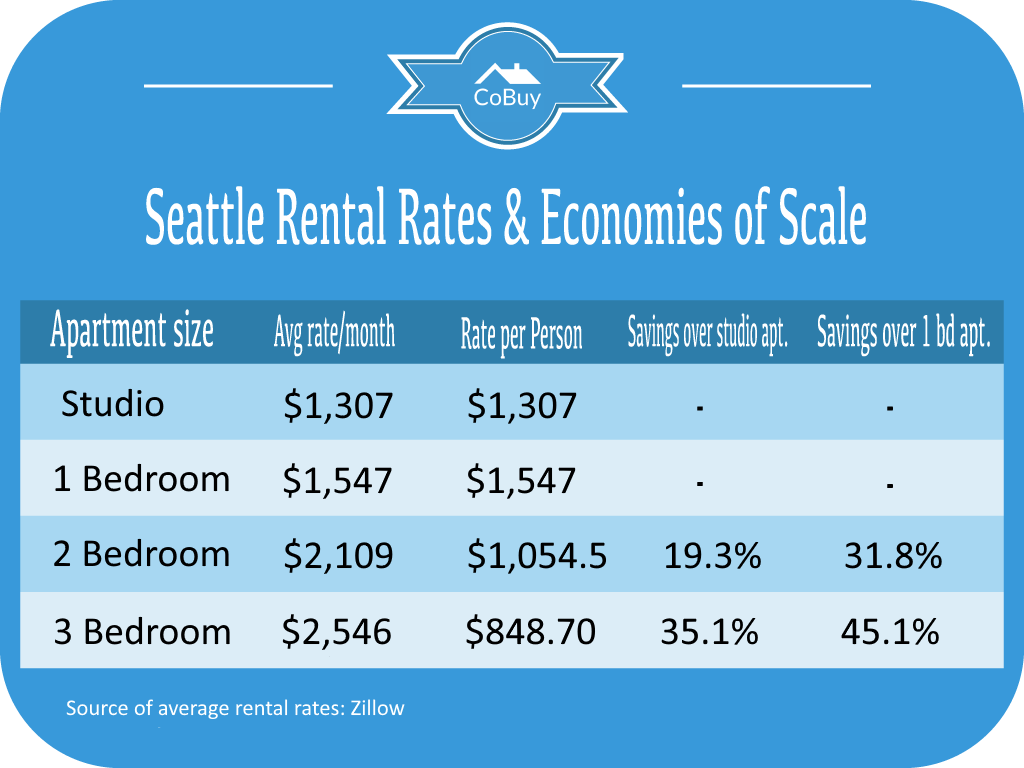 Now that we’ve covered beer and sushi, let’s go on to something a bit less delicious – houses. For the sake of this article, let’s pretend you’re done burning money on rent every month and would like to put that money towards building wealth in the form of home ownership. How much is a starter home in Seattle going to cost you? On average, one-bedroom homes are valued at $370,000. That’s a lot, even for the most diligent of savers.

Let’s think bigger and apply economies of scale. Say you and your two roommates have each been saving and decide it’s time to take the next step. A three-bedroom home in Seattle averages at $640,000. Divided between the three of you that’s a little under $215,000 per person, or about 42% less than had you bought on your own. Woah! What a difference! 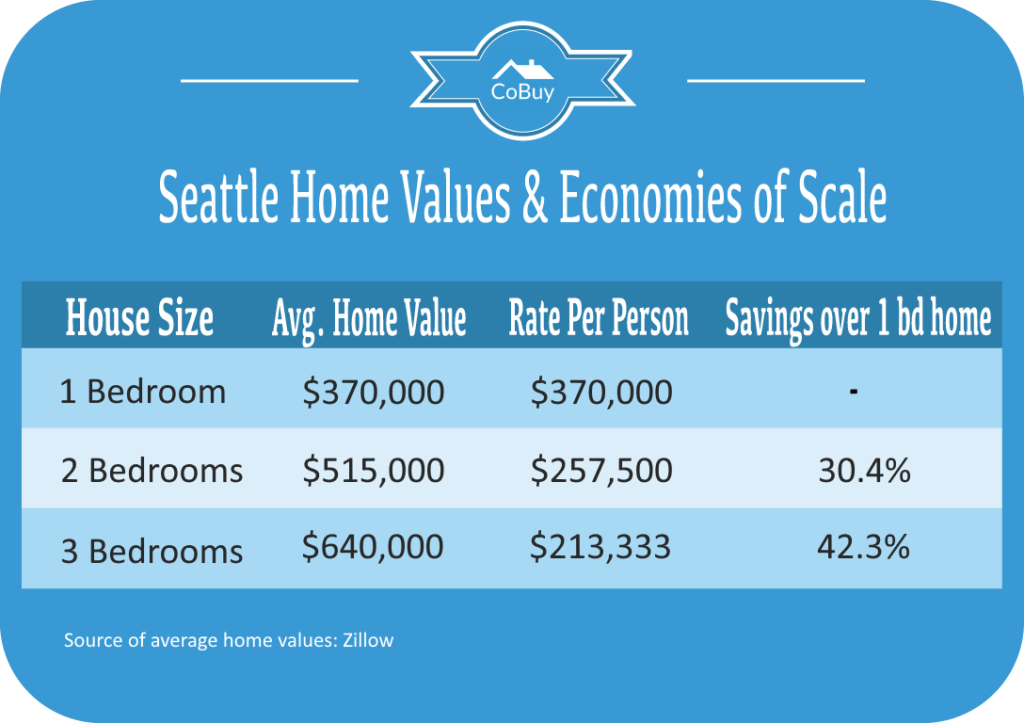 Beyond the savings, what are you getting out of the deal?

Starter homes are some of the most challenging to buy. There’s a great deal of competition for the small supply. Why is the supply so small? Builders prefer to construct high end homes that sell for more. Also, it’s financially advantageous for would-be sellers to rent out their starter home rather than sell it since rents are so high. For first time buyers, this means that it is becoming increasingly difficult to get on the property ladder.

CoBuying a home with friends or family is a great intermediary step between renting and owning your own place. The equity you and your group members build can eventually be cashed in to help secure a home of your own. Meanwhile you and your group members can enjoy living together without throwing away money on rent. Better yet, teaming up allows groups to get more bang for their buck.

Entering the market with a larger budget grants optionality. You and your co-buyers will be able to leapfrog the starter home market and have access to upscale homes in more desirable neighborhoods. You may not have to choose between a deck or backyard like you would have if you had struck out on your own. Sure you have to share, but does it really matter when it’s with your best friends?