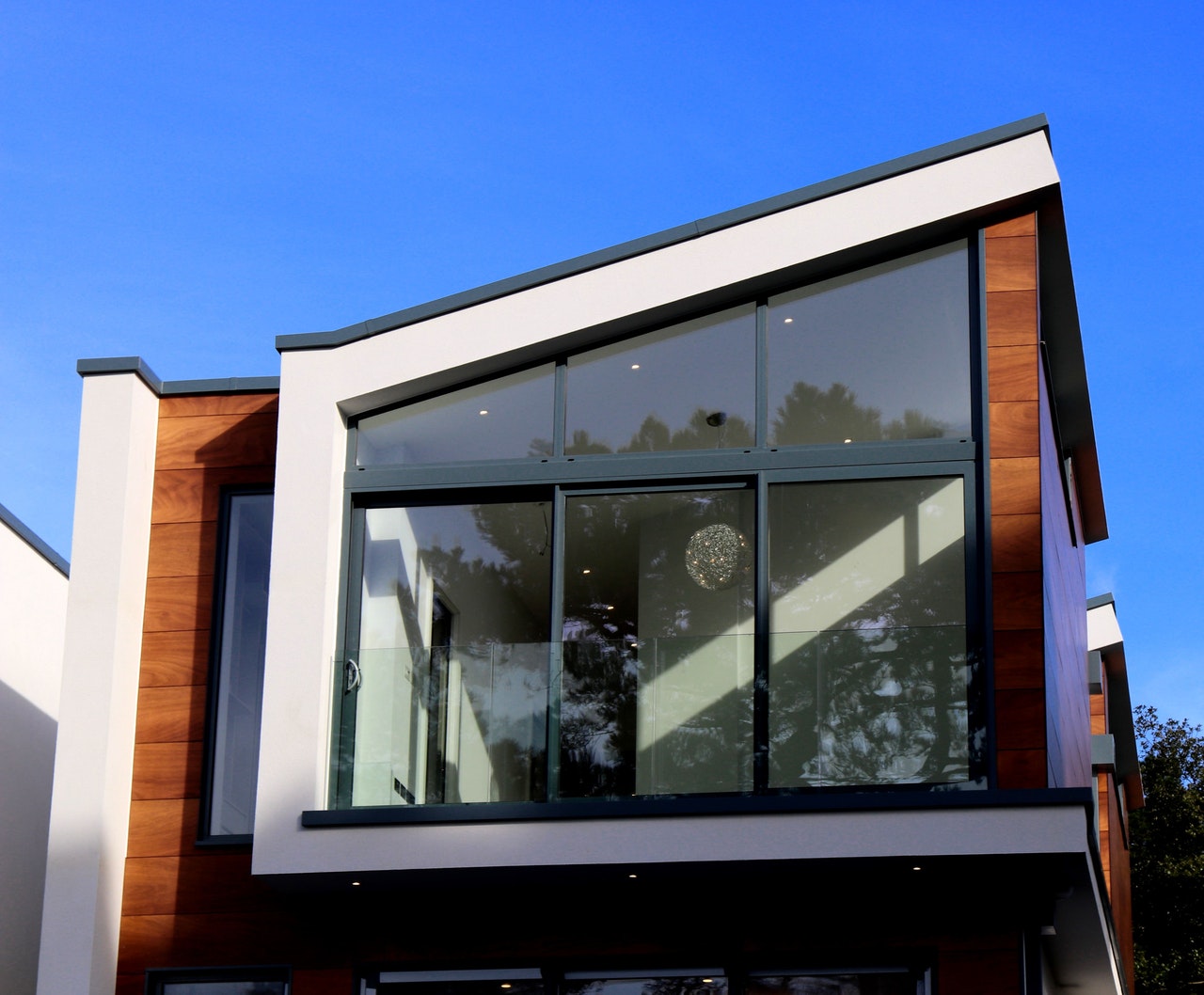 An investment in knowledge pays the best interest.

A new year means many things. Crowded gyms, ambitious resolutions, and in Seattle, rain. But it also presents fresh opportunities to build, learn, and grow. At CoBuy, we are optimistic about the year ahead and excited to make homeownership more accessible and equitable for everyone.

The idea that anyone can really own land is ironic. In the best case, we are stewards of the land. Philosophy aside, we all have to live somewhere and most of us have to pay for the pleasure. Combine the opportunity to build equity in a real asset (with institutionally-supported leverage) with a place to stay, and you’ve got a fairly compelling value proposition.

Buying a home is a big decision. Buying and owning together is complicated stuff. We started our company to help folks buy and own homes together intelligently, and that all starts with information. We believe that better information enables better decision-making. Every month, we share insights and perspectives designed to inform. We hope you find it useful, and wish you a healthy, happy 2019.

The U.S. economy has been on a roll for nearly 10 years. This stretch of stellar economic performance is unlikely to roar ahead indefinitely, but here’s a quick snapshot as we kick off 2019.

Wage growth is near 10-year highs

Geopolitics, global trade, fiscal policy, and monetary policy remain the wild cards in the deck - as always. But it is fair to say that on the whole, things are going pretty darn well. Last month we noted that many economists expect the pace of U.S. economic growth to temper but “remain strong”. Despite the flurry of ominous headlines over the past couple months, many big institutional investors agree. Barring a shock or force majeure, few credible market observers expect that a downturn is imminent. 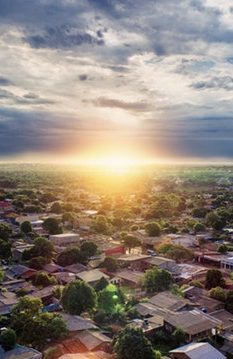 A crisis of housing affordability

It is clear that America has a growing problem with housing affordability. Sustained economic growth, rising wages, widespread migration towards metropolitan areas, scarce housing supply, and pre-historic housing regulation are all playing a part. Rents in many major metro areas have increased faster than wages over the past five years. Rising rents make it harder to save for the down payment necessary to purchase a home. According to Attom Data, home affordability in the U.S. has reached a 10-year low and home price appreciation is outstripping wage growth in 78% of the nation’s housing markets. Last year, the median home price rose almost 6% while the median monthly mortgage payment increased 16%.

And that’s not all. Home prices are expected to rise 5% nationally in the twelve months leading up to September 2019. The soaring cost of housing hasn’t gone unnoticed by the public: three in four Americans now believe there is a national housing affordability crisis.

There is some good news for homebuyers, however. After breaking through 5.00 percent in November, the average rate on a 30-year fixed-rate mortgage has dropped to 4.51 percent. This retracement owes largely to investor flight to quality following volatility in equity markets and lingering concerns about the government shutdown. 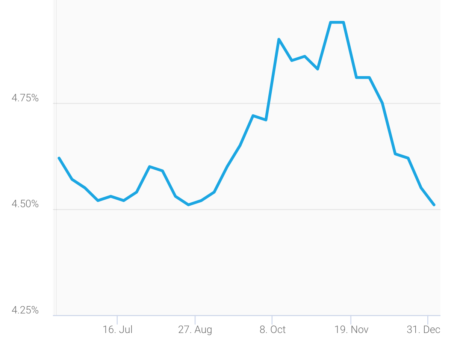 For a homebuyer borrowing $400k to buy a new home, a 50 basis point reduction on a 30-year fixed-rate mortgage means $43,420 less in loan repayments over the full term.

Seattle’s explosive growth has been fueled by a hyper-charged, robust local economy. The Emerald City is creating jobs faster than most other cities in the nation. The New York Times recently pointed out that this “Seattle-ization” has come at a price: rising homelessness, soaring housing costs, and heavy congestion.

The median sale price for a Seattle home has risen nearly 40% over the past five years according to data from the Northwest MLS. 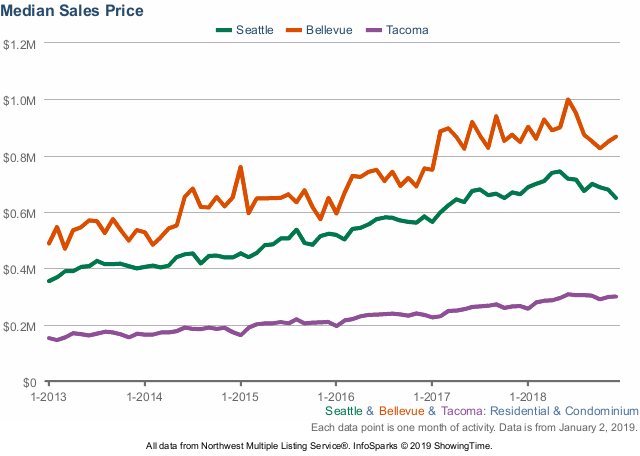 Here’s the trajectory of the median sale price for a single family home in Seattle over the past twelve months. 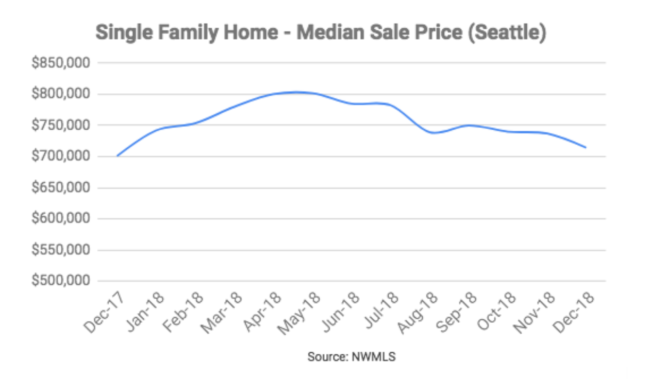 After skyrocketing 15% in just four months, the SFH median sale price closed 2018 more or less flat. This needs to be viewed in context. First of all, list prices, median sale prices, and home values are not the same.

List Price: the price at which a seller advertises a property for sale on the market.

Home Value: a proxy for the value of a property, or how much it is worth. Ultimately, the true determination of value can only be established through transacting. Most homes in a particular geography aren’t on the market, so home value indices are constructed in order to monitor fluctuations in local home values.

Next, all three are subject to seasonal swings and can differ substantially depending on data sets and construction. That said, what we saw in late 2018 was the Seattle market taking a breather after sustained through-the-roof appreciation. Near the end of the year, there was a bounce in the inventory of homes on the market following a long period of severely constrained supply. Seasonality played a part and some buyers took a break from the home search as mortgage rates (e.g. the cost of borrowing) jumped and the holiday season neared. These result: more balanced dynamics between sellers and buyers in the market. This is good.

After a spike in inventory in Greater Seattle, the number of homes on the market dropped off sharply in December. 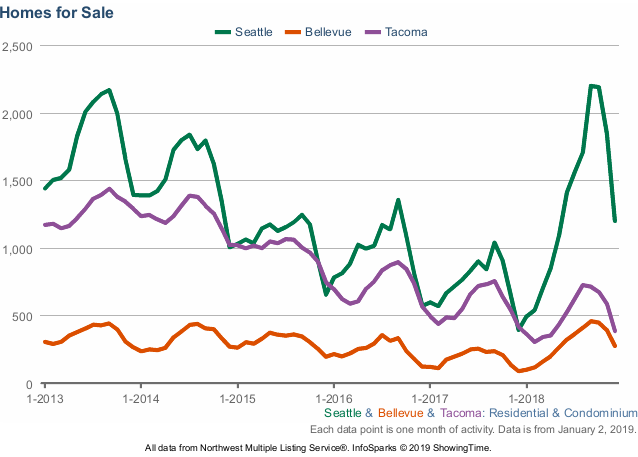 Months supply of inventory - the number of months it would take for all existing inventory to be taken down if no new homes came to market - is now looking fairly skinny across Greater Seattle.

The massive year-on-year increase in months supply for Seattle and Bellevue is due to the fact that December 2017 marked a low point.

In the words of Pliny the Elder, “the only certainty is that nothing is certain.” Here is what we do know…

Economic growth is expected to continue this year (and next)

The national economy is strong by historical standards, and is expected to continue to grow in 2019. The Seattle-Tacoma-Bellevue metro area is smashing it out of the park and has the second fastest growing economy of any metro in the country. 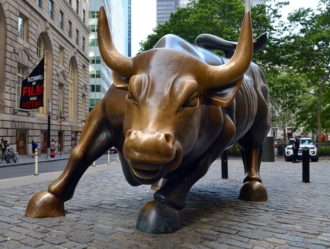 The local job market is growing fast, so is the population

The Puget Sound is adding jobs faster than most regions across the nation. Only fitting that Seattle ranks #1 amongst U.S. cities for population growth since 2010. 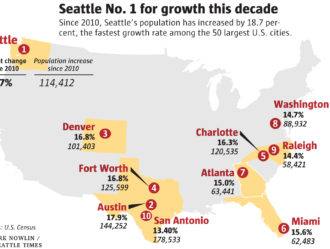 Financial markets expect that the Fed will raise interest rates at a slower pace, if at all, in 2019. Fed Chairman Powell has emphasized that monetary policy should be approached with flexibility. 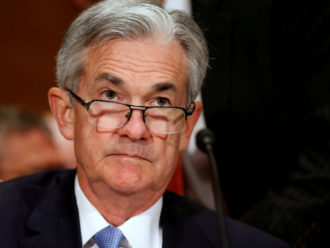 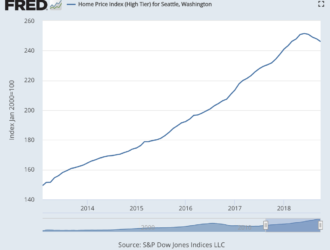 Seattle rents are through the roof

Like home prices, rents have moderated. Still, rents increased more than 30% over the past five years.

According to the Seattle Times: “market has cooled way down recently as more apartments open. But only after rents here soared 155 percent over the last two decades, making Seattle and its suburbs one of the most expensive places in the country to rent an apartment.” 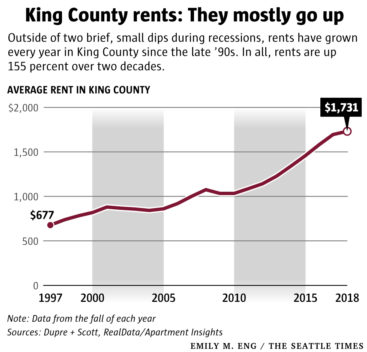 Not in my backyard!

Shockingly, 75% of residentially-zoned land in Seattle remains restricted to single-family homes, placing a dubious constraint on the supply side for a region encircled by natural barriers. 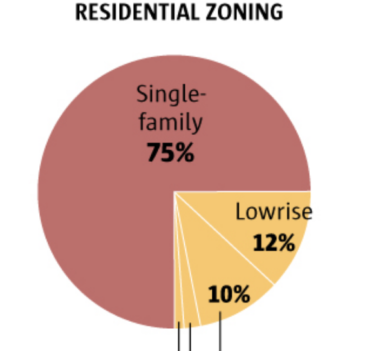 But what’s it all mean, Basil?

The local population is growing, the local economy is adding jobs, houses are expensive, rents are expensive, building up is tough, building out isn’t feasible, and the Fed looks set to approach monetary policy in a prudent manner.

There is little reason to doubt that we’ll see demand for homes across Greater Seattle, particularly after the market has taken a breather. Buyers who decided to wait it out on the sidelines at the end of 2018 will be joined by newcomers to the market. No doubt, those who do decide to enter the fray will be encouraged by lower borrowing costs and and more supportive market dynamics.

## Co-buying gets you more bang for your buck

**Pooling resources to buy a home can be a great way to get a down payment together and to benefit from economies of scale. Every month, we illustrate the benefits of combined purchasing power with up-to-date market data.**

In the example below, we assume:

* 10% down payment (not a hard requirement, many borrowers qualify with less)

* closing costs (buy-side) amount to 2.5% of the purchase price

Source: realtor.com data for SF-Oakland-Hayward Metro as of April 2019

On a per-bedroom basis, purchasing a three-bedroom home in the SF-Oakland-Hayward metro is currently 52% cheaper than purchasing a one-bedroom home. Economies of scale are real! Co-buying can deliver more bang for your buck and provide greater optionality.